Finding an antique camera that is in working condition doesn’t always mean it will yield nice results. Sometimes you’ll be disappointed in the results and other times you’ll be surprised at how well they come out. It always a gamble! The actual condition of the camera cannot really be set in stone until you actually photograph with it and see the results.

This past week I took the Kodak Duoflex II out for a spin using Kodak Tri-X 620 film. I purchased the film from BHPhoto for $13. 620-size film is not readily available so the price is a reflection of its difficulty to find. Loading it went off without a hitch, and the shutter and viewing glass seemed to work just fine. I had my roll processed at Tech Lab for around $17.00, which included processing and the high resolution CD with scans. I’ll admit I was disappointed in the clarity of the images. Many of them came out way over exposed and the ones that did come out were blurry. I’m not quite sure if the focusing ring was not working or if it was a mistake on my part, so I’ve decided to try again. Sometimes the second time around will yield better results because you’ll know what to look for.

The negatives are huge, around 3″x2″, so if they turn out right, you will have a lot to work with resolution wise.

The images that came out, though blurry, did have a certain creepy feel to them. This effect is only one that you can get with an antique camera. My Aunt Nora said it best, “It’s like you took these photos in another time period, but you’re here!”

My verdict is that while this little camera may not photograph so well, it does create unique images with an old time feel. I didn’t get what I was expecting but the results were pretty cool. Definitely a conversation starter. It was worth the $25 I purchased it for and hopefully the focusing ring can be tightened and easily fixed. 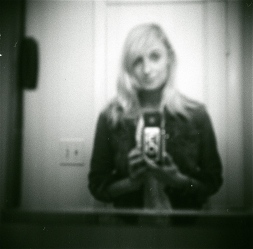 Me, shot with the “Hazy” setting.

My boyfriend’s sometimes evil cat Mischief. Another example of underexposure.

3 thoughts on “Results From Duoflex, Not So Expected”