Recently, I have dabbled in a new type of film. That’s right, I cheated on Kodak Portra. After interviewing film photographer Kevin Grall and seeing his slide film work, I knew I had to try it. People have been telling me for ages to give it a go but the price and nervousness of being a first timer hindered me in doing so.

I used a roll of old Ektachrome given to Andrew and I by his photography professor. As of 2012, Kodak had discontinued all of their slide film. Receiving this awesome film seemed to me like a good omen and I decided it was time. So what is it exactly?  A normal roll of film is seen as a negative when processed, a reversed image. This is because of the darkroom process of printing. To be transferred to photo paper, the image has to be originally reversed to transfer correctly. Slide film, or reversal film, is a positive as soon as it is processed. So the image is produced as a positive on a transparent base. Kinda looks like a mini photo when it’s finished.

Why? Well slide film is intended for the use of projectors. Those crazy little machines that your teachers used pre-the year 2000 to educate you visually on various subjects. The light is shown underneath the slide and the projector, well projects, it up onto a screen making the little image big.

Color reversal film, or commonly called slide film, creates the opposite of color negative filmor black and white film. Instead of creating a negative to be printed to a positive, the slide film is a positive of the image. As such, the slide film produces extremely rich and vibrant colors that come closer to the actual colors and tones present during exposure. Alternatively, slide film is not nearly as flexible as color negative or black and white film. Exposure must be precise and areas of high contrast are much more difficult to properly expose with slide film. Slides can be printed in the darkroom, but the process is generally more expensive.

As the name reversal suggests, slide film works the opposite of print film. In print film the red, green, and blue emulsion layers are exposed and leave a negative dye of cyan, magenta, and yellow. Slide film is a subtractive process that starts with layers of cyan, magenta, and yellow. When the film is exposed, the dye is subtracted to reveal red, green, and blue colors. Thus, when processed the film reveals the actual, positive, colors of the image.

Pretty interesting right? I supposed you’re ready for some examples!

Posted by Flickr user, Lalitree. Check out their work by clicking the photo.

Posted by Flickr user Kent Johnson. Check out his work by clicking on the photo.

Posted by Flickr user Vox Photo. Please check out his work by clicking on the photo!

So pretty! I had mine processed and mounted (put in the little squares) for $14. I have yet to scan them into photos for the web, so I settled for taking a few quick photos with my iPhone. 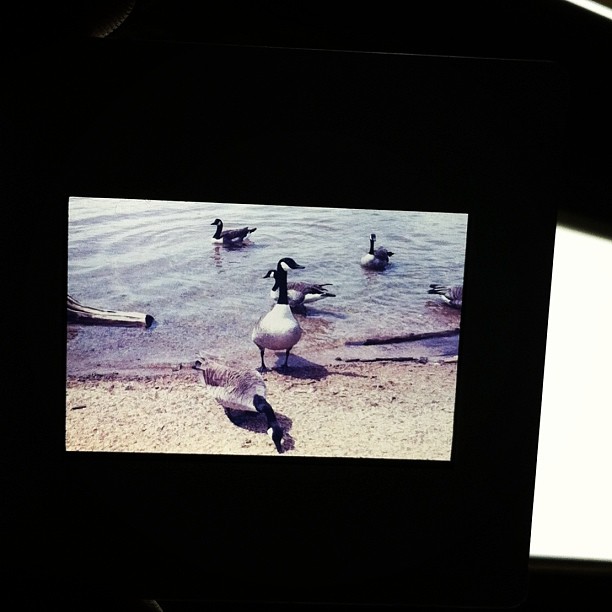 Ducks at the reservoir. Ektachrome. 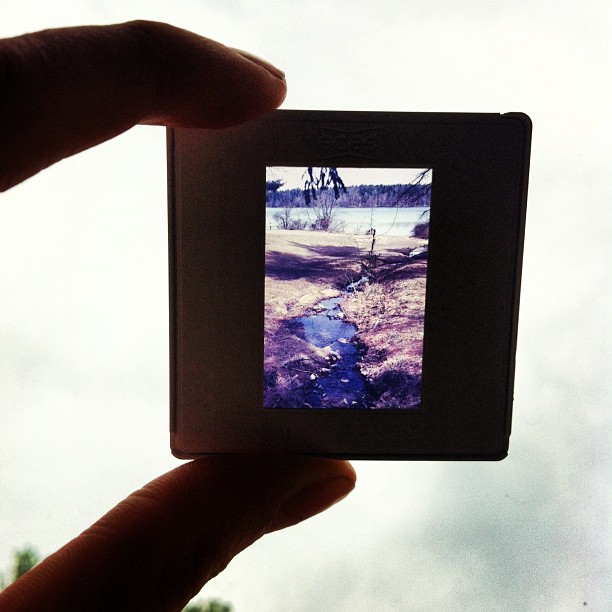 They aren’t super exciting (but pretty!), it was my first try at it so I wanted to do a test run and see if I could do it. Turns out I can! Slide film doesn’t give you a lot of leeway like regular film does. If you over or under expose normally, the photo still looks somewhat ok. With slide film, if your exposure isn’t right on point then it’s ruined. Turns out it wasn’t as hard as I thought.

If you wanted to try this out yourself, I recommend using Fuji Velvia 50 since Kodak is discontinued. You can always shop around on eBay or Amazon for people selling expired rolls.

Please don’t hesitate to send me what you come up with!

10 thoughts on “Slide Film: What Makes It Different?”