One of the reasons I enjoy film so much is because IT LASTS. Look back a hundred years and there are photographs that are still intact. Something about being about to print from negatives (if kept relatively protected) so long after they are processed is pretty cool. I have been sailing around the internet and looking up older photo sets, ones taken long before my time.

This one set by photojournalist Andre Zucca really sparked my interest for a number of reasons. One because it was the earliest full color photo set (and one of very few sets depicting Paris in the 1940’s)  and two…he was a photojournalist hired to create propaganda photos for the Nazis in the suggestion that France was thriving in its occupation. If you know about history you’ll know that that obviously wasn’t the case.

BOOM! To get the full impact, here’s a short history lesson to help you out:

Back when France was under occupation from the Nazis. As a result of the defeat of France and its Allies in the Battle of France, the French cabinet sought a cessation of hostilities. An armistice was signed onJune 22, 1940 at Compiègne. Under its terms, a designated area in the north and west of France, thezone occupée, was occupied by the German Army; in this region, the French government located at Vichy, headed by the ageing Maréchal Philippe Pétain, was subordinate to the Germans.

The Germans seized about 20% of the French food production, which caused severe disruption to the household economy of the French people. French farm production fell in half because of lack of fuel, fertilizer and workers; even so the Germans seized half the meat, 20% of the produce, and 80% of the champagne. Supply problems quickly affected French stores which lacked most items. Faced with these difficulties in everyday life, the government answered by rationing, and creating food charts and tickets which were to be exchanged for bread, meat, butter and cooking oil. Hunger prevailed, especially affecting youth in urban areas. The queues lengthened in front of shops. In the absence of meat and other foods including potatoes, people ate unusual vegetables, such as Swedish turnip and Jerusalem artichoke. Products such as sugar were replaced by substitutes (saccharin). Coffee was replaced by toasted barley mixed with chicory. Some people benefited from the black market, where food was sold without tickets at very high prices. Farmers diverted meat especially to the black market, which meant that much less for the open market. Counterfeit food tickets were also in circulation. Direct buying from farmers in the countryside and barter against cigarettes were also frequent practices during this period. These activities were strictly forbidden however and thus carried out at the risk of confiscation and fines. Food shortages were most acute in the large cities. In the more remote country villages, however, clandestine slaughtering, vegetable gardens and the availability of milk products permitted better survival. The rationing system was stringent but badly mismanaged, leading to malnourishment, black markets, and hostility to state management of the food supply. The official ration provided starvation level diets of 1300 or fewer calories a day, supplemented by home gardens and, especially, black market purchases.

These photos show a completely different story, here are a few:

This photos shows France looking anything but worn torn or repressed. Andre Zucca 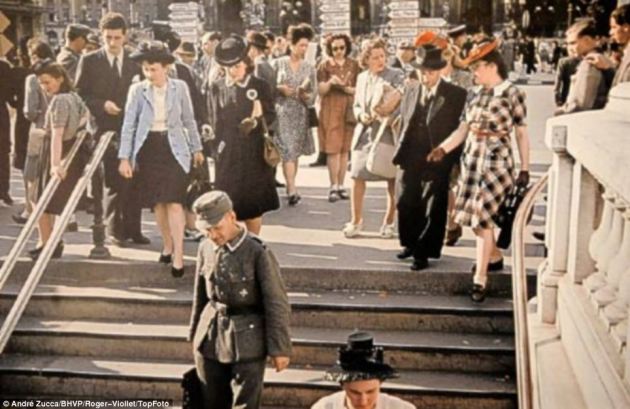 Andre Zucca’s photos showed the French mingling with Nazi soldiers, as if it was the norm. 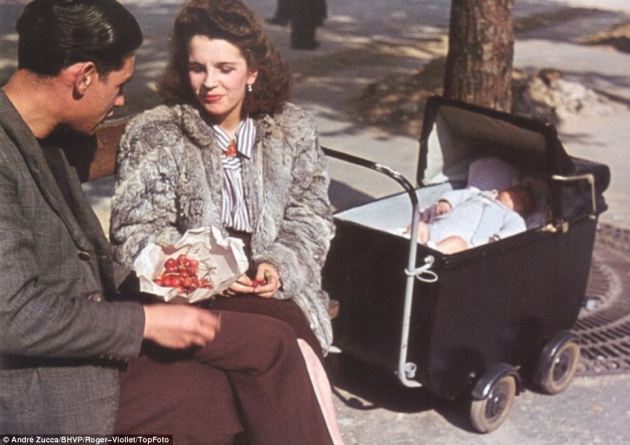 This man is right around the age to be drafted into the war, just this photo depicts him as a man without a care in the world, enjoying a day with his young family. Andre Zucca 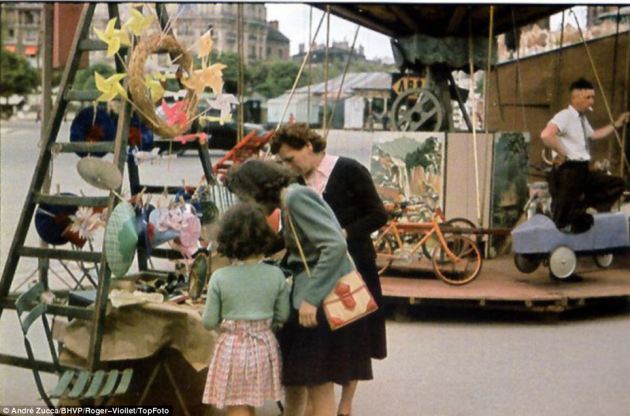 Despite France’s economy plummeting and most of it’s people on food rations, Zucca’s photos depict it as a thriving city with booming businesses. 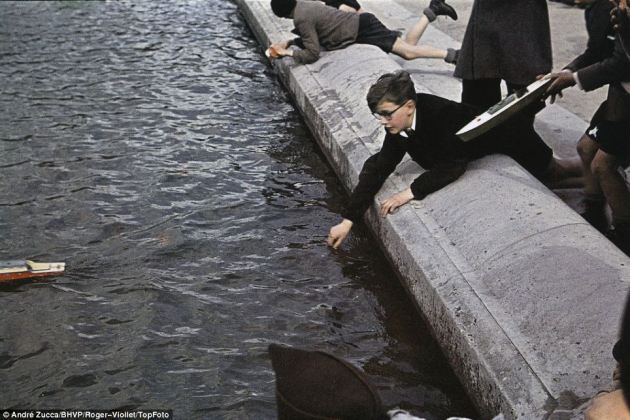 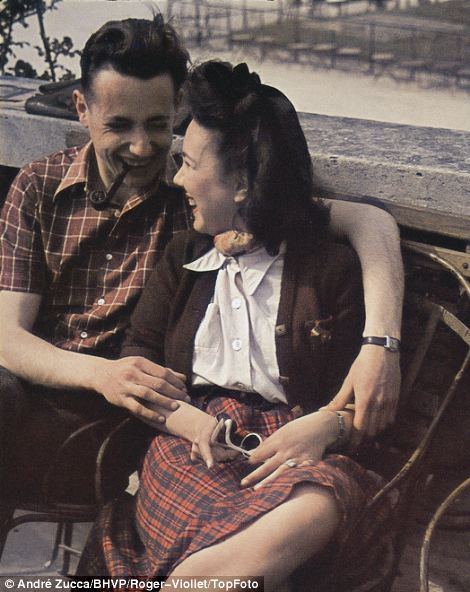 Two women walking about, one wearing the Jewish Star of David. Andre Zucca 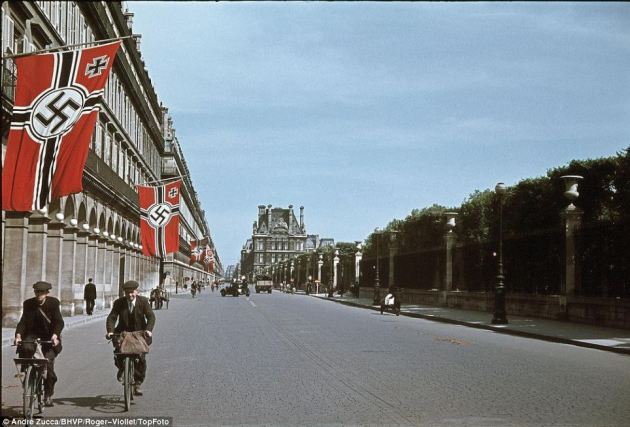 These photos paint a very different picture (pun not intended) of Paris back then. Thousands of French Jews were killed during this time, not integrating with society and Nazi soldiers in some carefree bliss. Looking through these photos, it’s pretty creepy how real that this looks.

So what film did Andre Zucca use? It is said that he had access to a lot of German Agfacolour film stock making him one of the very few photographers who could make all color photo sets back then. Despite their faded coloring, they have held up pretty well for the past few decades.

So what is it exactly? Here’s some Wiki help!

Agfacolor was the name of a series of color film products made by Agfa of Germany. The first Agfacolor, introduced in 1932, was a film-based version of their Agfa-Farbenplatte (Agfa color plate), a “screen plate” product similar to the French Autochrome. In late 1936 Agfa introduced Agfacolor Neu (New Agfacolor), a pioneering color film of the general type still in use today. The new Agfacolor was originally a reversal film used for making “slides”, home movies and short documentaries. By 1939 it had also been adapted into a negative film and a print film for use by the German motion picture industry. After WWII, the Agfacolor brand was applied to several varieties of color negative film for still photography, in which the negatives were used to make color prints on paper. The reversal film was then marketed as Agfachrome. Agfacolor Neu, called simply Agfacolor after its predecessor had been retired, was the German response to Technicolor and Kodachrome. Like Kodachrome, introduced byEastman Kodak in 1935, the new Agfacolor film was an “integral tripack” with three differently color-sensitized emulsion layers. Unlike Kodachrome, the corresponding color-forming dye couplers were made integral with each layer during manufacture, greatly simplifying the processing of the film: with Kodachrome, the dye couplers had to be introduced one at a time during a very complicated development procedure that required special equipment and could only be done at a Kodak processing plant.Agfa film for aerial photography is being perforated for 35mm still camera use and being marketed by Rollei. The same film stock is also being perforated and slit for 16mm cine and Super8 cine use by Wittner Cinetec of Hamburg, Germany.
Although the coloring is desaturated (due to age) mimicking that of today’s Kodak Portra, Agfacolor in less explanation is simply like today’s generic color film.

Want to see the entire set? Go here! Paris through a Nazi’s lens: Propaganda pictures of Occupied France taken by photographer ordered to prove city was thriving under German rule

What happened to Andre Zucca? He kept shooting, usually a lot of weddings, until he died in 1973.