I’ve been following a lot of different photo forums and the number one discussion topic I see is about concert photography and capitalizing on it, so I figured I’d offer some guidance.

Concert photographers are some of the most passionate types I know as well as the nicest. I see them get taken advantage of time and time again by places refusing to pay them what they’re worth or through the fact of just wanting to be in the pit so badly that they won’t bother fighting for any type of compensation or they don’t know how to. I know how that is, I’ve been there. The adrenaline rush of photographing a musician you really love, less than ten feet away from them in a cramped space full of other people doing the same thing is really something. So much so that many photographers are willing to lay down and accept that the job won’t pay them and shoot it for free. I’ve shot my fair share of free concerts in exchange for tickets, not saying it’s a bad thing to do from time to time, especially if you’re more of a hobbyist. It really helps to get your name out there when you’re a beginner.

However – If you are a seasoned concert photographer and you’re consistently putting out high quality work and not getting compensated for it, there’s a problem. Stand up for yourself. Don’t let your passion overshadow your need to making a living. Shooting a concert, especially a festival, can be super hard work. You lug around twenty pounds of photo gear for at least four hours, you are concentrating and using all of your brain muscles during the set, especially if that set has lighting jumping all over the place. You have ten minutes max (first three songs) to get your money shot. It can get stressful and IS ALWAYS fast-paced. It’s much more than just snapping a few photos.

Judas Priest for The Baltimore Sun 2014

Flaming Lips for The Baltimore Sun 2014

Edward Sharpe and The Magnetic Zeroes for The Baltimore Sun 2013

So how do you get paid?
First of all, unless it’s a PR shoot to advertise their space, a venue is most likely NOT going to pay you in actual money. Many will offer free beer or tickets or whatever, which is cool, I’ve done it, but in doing that they also don’t get a huge set – maybe five or so photos max. If they aren’t paying, they typically don’t ask experienced photographers to shoot a set but more so welcome those who volunteer to do so. If a venue asks for someone experienced to shoot a show and doesn’t offer to pay you what they should be paying you, run because that means they don’t appreciate or value your craft.

Who does pay?
Bands and publications.

Bands hire tour photographers all the time and many bands only open the pit to that one photographer so they have control of what images come from that angle and what images get released to the media. Joan Jett does this often. Judas Priest does it occasionally as well. I’ve never done photo work for a band specifically aside from back in my beginner days with local bands and obviously I charged next to nothing then. I imagine the bigger bands would have to negotiate with you. To do this you would have to contact the band’s manager directly or their creative team if they have one. This is usually listed on their contact page on their website. Another good place to connect with people professionally is LinkedIn. This is often tricky to do as you would have to be someone who has a lot of clout in the music industry, not just the photo industry.

Publications are the best bet. In shooting for a publication you don’t have to be obligated to travel with one specific band or be on the band’s schedule – you shoot that one show and you’re done. How do you get in with a publication? Well, the intense route is journalism school and then internships and then you network and cling on the outer fringes by your fingernails as a freelancer until someone wants to bless you with the holy grail of a staff position. ….OR you can connect with the editor of a certain section of a publication – I suggest their entertainment or nightlife sections – and show them your portfolio. The way it works for me is that sometimes I just get sent concert assignments from being on the Sun’s freelancer list (a result of interning for free for six months) or sometimes I pitch concert ideas to either my photo editor or my friend who is an editor of the Sun’s nightlife section. If they want it covered and have the budget to pay me for it, off I go.

If you’ve never been in with a publication before, I suggest starting out small by pitching to online music magazines. A good way to tell if they have a budget for paying people is to see if they have a lot of ads on their site – if so, chances are they also have enough money to pay you. To get in with larger publications, you need to know how to shoot other things besides concerts because they assign their concerts by looking at their list of available freelancers who are able to shoot anything. It’s important to note that there typically isn’t any one single person that JUST covers concerts at large publications. The going rate for larger publications for twelve to fifteen images of concert photo coverage for three songs is $125. I’m not sure of what online magazines pay as it varies depending on how much they bring in in revenue.

Don’t take online publications saying “No” as a symbol for not having money, especially if they have a lot of advertisements on their website like I talked about above. Many places are accustomed to photographers shooting for free so they say to themselves, “Why bother paying if I can find someone to shoot it for free?” This is where you need to prove that your photos are different from the guy shooting for free next to you. Step up your game in composition, play around with that lighting, anything to make your photos look completely different from the thirty other people in the pit with you will help you get paid.

Foster the People for The Baltimore Sun 2013 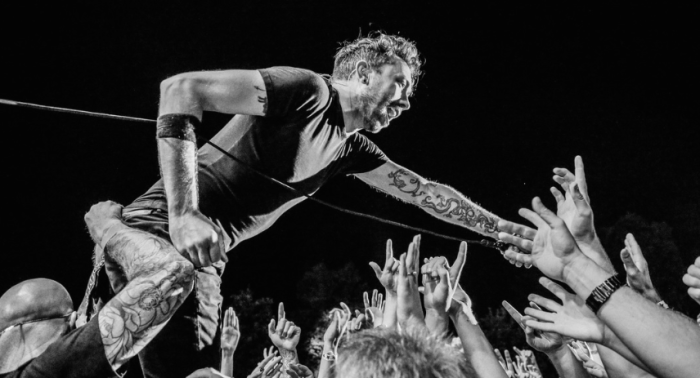 Rise Against for The Baltimore Sun 2014

Demi Lovato for The Baltimore Sun 2014

Can you actually make a living off of concert photography?
No.

I’m not gonna lie here. Very, very few people in this world have made a living strictly off of concert photography alone. Sometimes people are lucky to get the job of “house photographer” for a venue that actually pays them but this is rare. Some people stick with one band and are their tour photographer for years and they make decent money, but again, this is a rarity. To be able to make decent money off of concert photography you HAVE to be willing to photograph things besides concerts. Even the dudes and ladies that shoot for wire services like Getty and AP shoot other stuff than concerts. I shoot other stuff than concerts. Sorry, but when it comes to shooting for publication and making decent money sometimes you have to suck it up and take that presser or shoot that corporate business or photograph that basketball game (I’m not about shooting indoor sports but if you are, awesome) in order to have access to the stuff you consider fun. People assume that creatives never have to actually “work” but that assumption is very far from the truth.

To get access to the fun stuff put in the work doing the boring, hard stuff too.

Didn’t feel like reading all that?
Here’s a breakdown:

No, you can’t make a living just off of shooting concerts.
Yes, you have to shoot other things than just concerts to be freelancer for a publication where you make $$$.
Yes, the boring shoots are worth having access to the fun ones.
No, venues typically won’t pay you unless it’s for a PR shoot.
You have to offer a fresh eye on what everyone else next to you is shooting.
Don’t ever sign away your copyright – no matter if you shot for free or was paid.
Yes, you can legally sell your prints of a concert if you did not sign a specific photo release stating that you would not.
No, it probably won’t make you look good and yes, they can still have a legal team try to take you to court for it.

Absolutely hate photographing everything else but music? Pitch yourself to shoot band promos – take photos for their albums, their social media, their press releases, etc. Work your way up, start local, go regional, keep going. It will pay off but you can’t devote 100% of your time to making it happen if you don’t get paid anything. Charge a good rate (that depends on you and what you feel comfortable with – many photographers end up lowballing themselves), increase it as you go.

I speak from experience. I get paid the top standard rate for 95% of the concerts I photograph, the others that I do not get paid for I volunteer for in exchange for tickets to a sold out show or whatever. The unpaid concerts are usually ones I have pitched myself as the paper I shoot for only assigns me if they have the budget to pay me. Any other concert veterans have wisdom to share for those trying to get reimbursed for their talents?

12 thoughts on “How To Get Paid for Concert Photography”