This is my last post of 2014! Watch out. Thank you guys for all the feedback on my last post detailing my first year freelancing post interning for The BSun. I worked hard this year! With several new corporate clients and my second semester of graduate school underway, it looks like this year is going to be even busier. Not much else to say but a few quick things regarding my personal life and a few teasers for what’s to come in 2015 blog post wise.

I do have a somewhat disappointing announcement. A few weeks ago I applied for a summer internship with The Washington Post. I thought I had it in the bag this year. With not one but TWO feature stories I both photographed and wrote (I applied for the feature writing internship) that went viral and a blog that has won two awards (I also applied for the social media internship) I thought I had a good shot. Not going to lie that I was really surprised and sad that they rejected me. It would have been a great place to learn and gain some more newsroom experience. I really don’t know the reasoning behind the rejection, all I can rationalize is that someone who did the same type of stuff I did who had more to show – more stories than my two, a blog with a longer history, I don’t know – ended up getting it. I had no idea what type of competition I had. Admittedly I cried. I waited all day to hear on if I got it or not and at around 5pm my rejection letter came in my email. When I think back on it, I did really, really want this but I’m happy with what I submitted and I’m happy with my content…I submitted the best material I’ve done to date and it will only push me to do better for next time.

So what happens when you get rejected for something you were 95% positive you thought you were going to get? You dye your hair teal.

My mom says to me “Is this because of the Post thing? Don’t you think this is a little juvenile?”  Well moooooom, grey wasn’t really appealing to me as a hair color and since I’m fair skinned I would have risked looking like a low-grade albino. This goes with saying that I think albino people are some of the most visually striking people I have ever seen…however, they don’t have freckles like I do. Grey hair + fair skin + freckles on a twenty-something year old college student is a little too weird for my taste. It’s actually brown and teal and the teal will fade a bit to a nice pastel. Fortunately, my workplace doesn’t dictate my hair color…I have clients that don’t put my physical appearance over the professional work I provide…so there’s that. Also, it’s just hair; as long as I’m not bald or have a mullet who cares?

I hope everyone has a safe and happy NYE celebration! Please remember to drink responsibly and please don’t get behind the wheel if you’ve been drinking. Taxis, Ubers, Lyfts, they’ll all be out in droves that night (watch out for that surge pricing!). ❤ 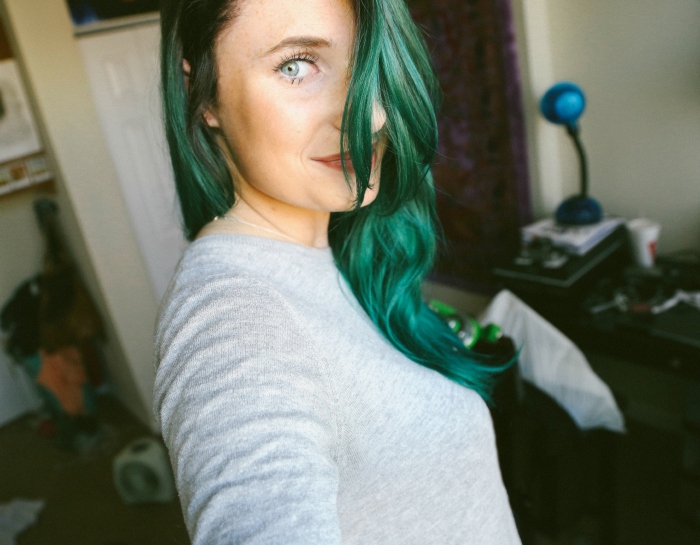 4 thoughts on “Happy New Year To You!”