If you’ve been following me for a while, you know that I like to play with a lot of different types of cameras. I’ve gotten a good amount of questions as to what sizes film comes in. Then I realized, when I say things like “35mm” “620” and “120” film, most of you who aren’t photographers probably have no idea what I’m talking about. I figured I’d do this mini post so everyone is on the same page!

Hi! This is what one strip of 35mm film looks like. You recognize that? Well, good, I had hoped you would. Gives me hope that the generation of film users is not lost!

Let us begin with a familiar friend, 35mm. 35mm film is the every day “normal” film you have most likely encountered before. It is what the Canon AE-1, the Minolta x-700, and the FishEye2 cameras take. 35mm can come in black and white or color and is typically cut into strips of four frames if you get it processed at a lab. Processing 35mm all by yourself is easy! Well, processing black and white all by yourself is easy, processing color is a whole other ballgame we aren’t ready to play yet. And by “we” I mean “I”. If you want to try it yourself, this website right here has a very nice tutorial with photos and step by step instructions! If you are using 35mm I recommend Kodak Porta 400 color and Tri-X black and white. I have gotten beautiful results with both! 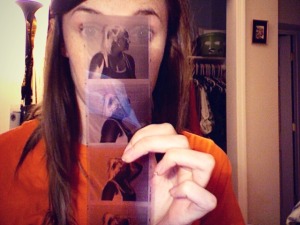 Hey. This is 120 medium format film shot with a Hasselblad camera. Note how much bigger the negatives are! This provides even more superior resolution for printing.

Next we have 120 film which we call medium format. Medium format refers to film larger than 35mm and smaller than 4×6 which is known as large format. 120 film is used in cameras like the Lomography Diana F+, the DuoFlex2 (well actually 620 film but 620 is almost the same as 120, just on a different sized spool) and a Hasselblad. 120 is a bit trickier to load than 35mm but you’ll get the hang of it! Paper protects the film inside the spool and you have to be very careful when loading and tightening at the end; the 120 doesn’t need to be rewound like 35mm does, it rewinds itself back into its spool as you shoot. All you do at the end is lick the sealing tab and pull taught and you are good to go!

In comparison 35mm is easier for beginners because all 1hour photo labs will process it, 120 is typically only processed at professional labs like Tech Lab. I would keep talking about more, there are loads of film sizes! To be honest, 35mm and medium format are the only ones I have tried out and plan to try out at the moment. Large formats, are well, large. Not very convenient for the time being. If you read my blog for advice on camera using, I definitely recommend trying out both! There are photographers who will swear by one or the other but I personally think that they have a uniqueness to each of them. I like the size of medium format and the ability to make my images giant but I also love having 36 exposures on one roll in 35mm. Now that you are educated on the two different types of film I use, I can ease my burdened mind and carry on rambling about film without worry!